Supply shortage: Across Australia, the supply of social and affordable housing is not keeping pace with need. Most recent housing need estimates found 806,100 households in affordability stress and a further 527,400 households that had not formed due to affordability constraints.

The share of housing stock in the social rental sector has declined from 5.1 per cent at the beginning of the century to 4.2 per cent in 2016.

The private rental market has not filled this supply gap; there was a shortage of 478,000 affordable and available private rental dwellings for low-income households in 2016.

Yet, housing needs are projected to increase and public housing waiting lists stand, as of 30 June 2019, at 148,520 households. 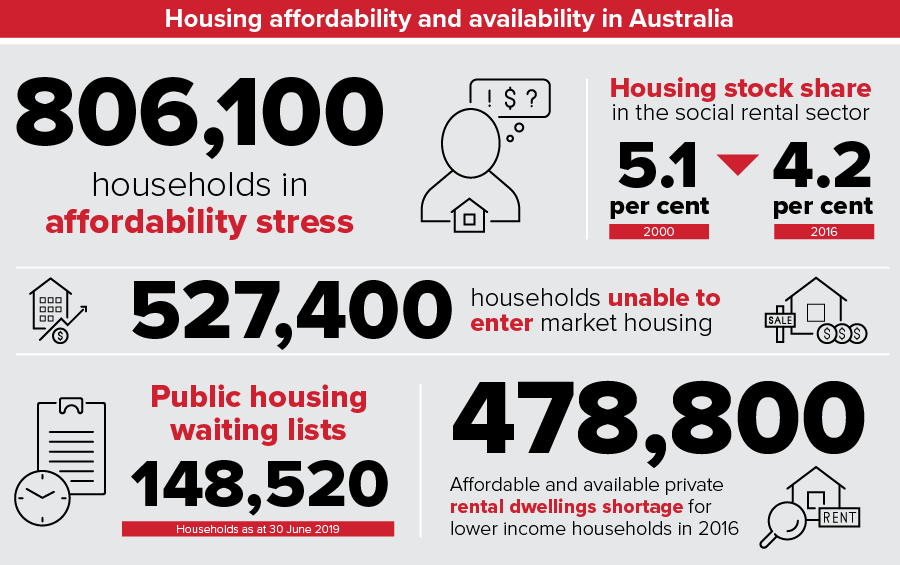 It is an inescapable conclusion that a housing policy priority for Australia is to increase the supply of social housing for the most disadvantaged and affordable housing for low-income households.

It is an inescapable conclusion that a housing policy priority for Australia is to increase the supply of social housing for the most disadvantaged and affordable housing for low-income households.

Under a rallying cry of ‘homes fit for heroes’, government building of public housing accelerated after the Second World War. This met multiple objectives of stimulating housing supply, alleviating inner urban slums, housing a growing migrant population and providing a workforce for growing manufacturing industries on the urban fringe. Much public housing stock, built in the 1950s and 1960s, was designed to accommodate working families in three bedroom houses (56% of the public housing stock was three bedroom houses in 1981). By 2017, this stock is reaching the end of its asset life as maintenance costs become excessive. Expenditure on maintenance rose by 30 per cent in the period 2001 to 2006, double the rate of the previous 5 years. As well, with public housing now focussed on housing those with the greatest needs rather than low-income working families, the stock is not fit for today’s tenants who are more likely to be single person households (57% of public housing households).

Consequently, 16 per cent of public housing dwellings were underutilized in 2016 that is there were two or more bedrooms than there were residents.  In addition around one third of households in social housing include at least one member with a disability, older two or three-storey ‘walk up’ apartments are not accessible for these tenants.

How to address the supply shortage and modernisation issues

Whilst consensual evidence about how specific social mix mechanisms operate eludes us, the research does reach broad conclusions that can guide government policy and practice.

A first overarching conclusion is that disadvantaged householders are ‘significantly harmed by the presence of sizable disadvantaged groups concentrated in their neighbourhoods.’

A second overarching conclusion is that any improvements for disadvantaged householders due to social mix arise ‘more probably’ at a wider neighbourhood level due to ‘positive role modelling, stronger collective control over disorder and violence, and elimination of geographic stigma’.

For Australian governments undertaking public housing renewal with changes to a neighbourhood’s social mix there are then a number of practical steps to consider.

The policy approach should be ‘…voluntary, gradualist, housing option-enhancing strategies that over the longer term expand opportunities for lower income families to live in communities with households of greater economic means.’

Meaningful consultation about the renewal plan with existing residents of the broad neighbourhood is essential. This builds a trusting respectful relationship between residents and developers that can help during the long period of renewal, both in terms of tenancy support and in combating problems with anti-social behaviour.

AHURI research finds that ‘good participation needs to be nurtured. It needs time to develop and it needs to be adequately resourced. The need for local facilities, accessible community development support and training … should not be seen as quick fixes. A long-term commitment is required to overcome social problems and to empower local people...’.

As one of the key gains stemming from tenure-mix policies is their ability to reduce the stigmatisation felt by social housing tenants, the physical appearances of newly built or redeveloped social housing should integrate into the existing housing fabric of the surrounding suburb. For the same reason, where new buildings incorporate both market housing and social housing there should be no visible distinctions between the different tenure types such as separate entrances.

A long-term commitment is required to overcome social problems and to empower local people.