Domestic and family violence (DFV) is the main reason women and children leave their home. In 2017–18, 121,100 people (42% of all clients) who presented as clients to a Specialist Homelessness Service (SHS) reported that they were escaping DFV. Of these DFV clients, over 26,500 were children aged nine or younger; 24,500 were adults aged 25 to 34, of whom 94 per cent were female; and 61 per cent (about 113,800 people) were at risk of homelessness when they first came looking for help and support.

What is domestic and family violence? 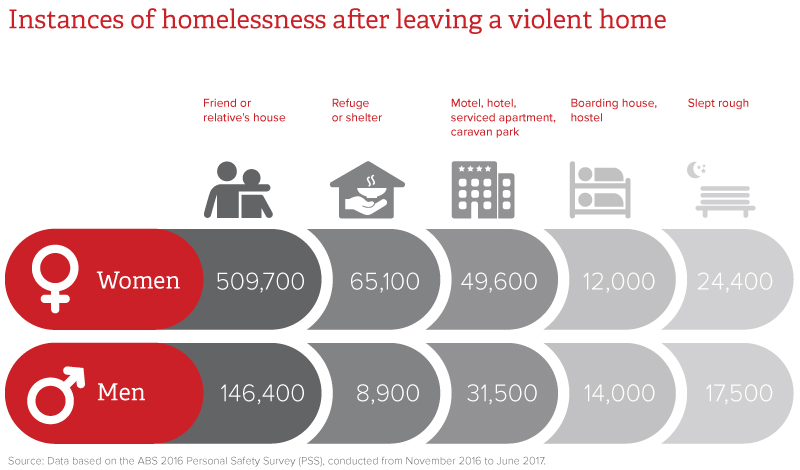 The Australian Bureau of Statistics (ABS) 2016 Personal Safety Survey reveals that around 1.26 million Australian women and 370,000 Australian men had, at some point, ended a married or defacto relationship with a partner who had been violent towards them. As a consequence of ending the relationship, 50.4 per cent of women (about 639,300 women) and 48.8 per cent of men (179,900 men) moved out of their home leaving it to the partner. In another 9.3 per cent of cases for women (11.8% for men) both partners moved out.

The survey found that for many, as a consequence of moving out they effectively became homeless for a period of time*.

*The survey may record respondents staying in more than one place after leaving their home.

As there are many different types of families affected by domestic and family violence, a wide range of different supports and assistance is needed. However, the types and levels of assistance and support needed will depend on the individuals’ circumstances such as financial resources, health, family support, social status and cultural upbringing, together with the location they are living in.