Australia is a highly urbanised nation with around two-thirds of the population living in a city. Prior to the COVID-19 pandemic, population growth was concentrated in Australia’s major capital cities, with growth rates of 1.8 per cent being significantly higher in capital cities than in the rest of the nation (which grew by 1.0 per cent on average and had some areas experiencing population decline in 2018). Facilitating population growth features strongly within metropolitan planning strategies and infrastructure reports. Planning for Australia’s future population outlines the Australian government’s policy framework on supporting continuous population growth to facilitate to the development of a strong economy and cohesive society backed up through attracting skilled migrants.

These policies are predicated upon an assumption of population growth, which depends to a large extent on Australia’s migration policy settings. The effect of closing Australia’s borders in response to the COVID-19 pandemic has been significant.

The Brief on ‘Population’ refers to the population dynamics in Australia’s major capital cities, smaller and regional cities, the settlement of migrants and demographic changes in ageing and household formation.

Australia’s population growth has been concentrated in its major cities, notably Melbourne, Sydney and Brisbane (with a combined 2.1 per cent increase in population between 2017 and 2018). Infrastructure Australia emphasises that population growth is an opportunity to enhance economic prosperity and liveability.

A recent AHURI Inquiry researched the key drivers of population growth and mobility in Australia; the effects of economic agglomeration on the productivity of cities; and urban governance frameworks that have been planning for, and responding to, economic and population growth.

Prior to the COVID-19 pandemic, many smaller cities, had lower population growth rates, in contrast to fast growing major capital cities. While the population of Melbourne increased by 2.4 per cent in 2018, several urban areas, including Darwin, Geraldton, and Rockhampton, experiencing a decline in population. For many regional cities, this trend shifted during the COVID-19 pandemic, with households moving out to regional areas. AHURI evidence has identified that the development of regional cities and their local economy is constrained by a lack of infrastructure and housing stock. For regional cities experiencing increased demand, including from inward migration, housing availability and affordability has been significantly reduced. 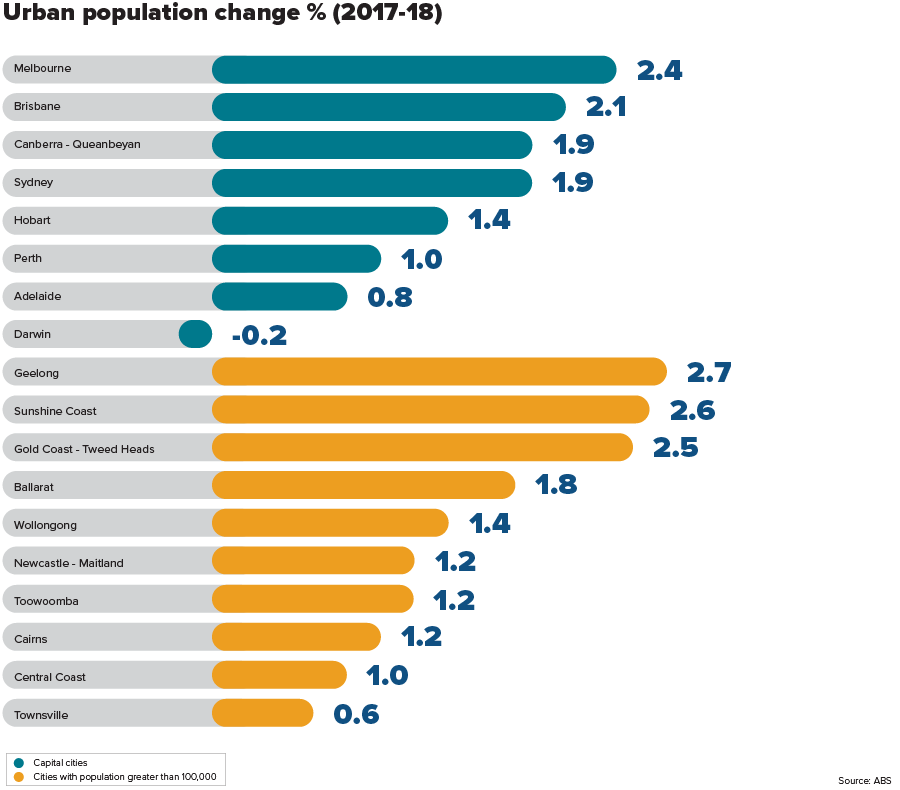 Infrastructure Australia had emphasised previously the role of governments to facilitate further population growth in regions to ensure on-going economic prosperity. Regional communities and economies should be supported by long-term planning and coordinating government and private sector investment. A recent Infrastructure Australia report identifies the availability, diversity and affordability of housing, broadband and mobile connectivity, water security, access to education and training, and lack of public transport as main infrastructure gaps.

Major capital cities are the main place for migrants to settle. The Western Australian strategy Perth and Peel@3.5million, acknowledge the contribution of skilled migrants to cities’ prosperity and cultural diversity.

However, the settlement of migrants features less extensively in urban policies but is rather addressed in more general population policies. ‘Planning for Australia’s future population’ highlights the role of permanent migrants in addressing skill shortages in the economy and offsetting the effects of an ageing population. The strategy seeks to manage population growth by redirecting migrants to settle in smaller cities and regions instead of major cities.

The demographic characteristics of Australia’s population are changing, based on a shifting composition of households and an ageing population. AHURI research shows that demographic changes in Australia, such as an accelerated ageing of the population and substantial decline in household formation rates and average household size, is impacting home ownership outcomes, in particular for younger age cohorts.

Metropolitan planning strategies focusing on urban consolidation and higher density residential developments are taking changing demographics into account. In connection to the built environment, city policies could address the provision of adequate housing, social infrastructure and urban amenity in accordance with changing household compositions and needs.

Population dynamics impact housing markets, liveability and infrastructure provision in Australian cities. Urban policies in major capital cities have been responding to growth-induced demand fuelled by immigration, however, this has been disrupted by the COVID-19 pandemic. Fluctuations in population are experienced in many smaller and regional Australian cities, urban policy responses often focus on addressing the needs of the population through improving infrastructure, housing and employment conditions and the provision of adequate social infrastructure and health care services. Urban policies also need to respond to demographic changes, such as an ageing population and household formation becoming more diverse, and plan for more environmentally, economically and socially sustainable outcomes.