Back to search
Share
brief Transport Community and place

Will COVID-19 change the way we travel to and from work?

Is it feasible to practice social distancing during work commute?

As states and territories across Australia review their calls for people to stay at home due to COVID-19, there are concerns about how people will keep a safe distance from each other when commuting to their place of work.

Some work places may be able to encourage staff to travel to and from work outside of peak public transport usage however this is less of a solution for people who have to be at work at a set time, such a retail workers who have to be there when the store opens.

How far are we commuting to work?

The 2016 Census reveals that 10 million Australians travel on average 15.9 kilometres (km) (with a median travel distance of 9.9 for their work commute. People who took public transport had the furthest average commute distance of 18.6 km (median 13.4 km); those who travelled by vehicle (i.e. private car, taxi etc.) travelled 16.7 km (median 10.9 km); while people who walked or rode a bicycle travelled the shortest distance of 6.4 km (median 1.6 km).

Source: ABS 2071.0.55.001 Census of Population and Housing: Commuting to Work Table 7. Commuting distance from Place of Usual Residence by Mode of Travel to Work

For commuters who live close enough to their work to be able walk or ride a bicycle (4.5% of all commuters), travelling to their workplace is not likely to put them at any extra risk of catching the virus; however for people who catch public transport (11.8% of all commuters) there is an increased risk while travelling on a crowded train, tram or bus. Even if public transport were only to carry one quarter of its usual numbers of commuters,  research shows that appropriate social distancing requirements would not be possible on Sydney trains—where each carriage could only hold 38 people and the whole train could only hold 304 passengers, about 20% to 23% of normal busy volumes, if it were to provide the appropriate space for social distancing.

Increasing the frequency of public transport may help to alleviate fears of crowded trains, trams and buses, but it is expensive in terms of equipment, staffing and environmental and energy costs.

If public transport commuters choose instead to use a private car to get to work, it will increase congestion on already crowded roads (where 66.7% of commuters already rely on private car transport) and may increase the high costs of car parking in CBDs. 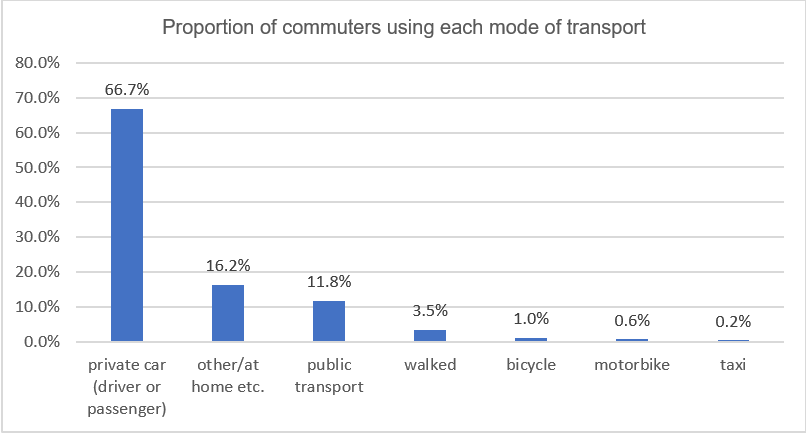 Source: ABS 2071.0.55.001 Census of Population and Housing: Commuting to Work. Table 8. Commuting distance from Place of Usual Residence by Mode of Travel to Work (MTW15P)

Proposals to expand cycling paths and pedestrian routes into the CBD of Australian cities are to be encouraged but such plans tend to benefit those who live close to the CBD and who have the ability to ride a bicycle safely and with confidence (for example this can be an issue with wet, slippery streets during wet weather and in winter time when streets are dark during commute times).

Could a 20-minute city be the solution?

The concept of a ’20-minute city’ has been a feature of liveability-focused planning policy in recent years, and with the coronavirus pandemic leading many people in large cities to connect more with their local areas, the idea of commercial and employment hubs across metropolitan areas may become more attractive. This concept promotes the viewpoint that people can find most work, education, recreational and sporting facilities within a 20-minute walk, bicycle ride or public transport trip from where they live.

One key proponent of the 20-minute city concept is Plan Melbourne 2017–2050. It is based on the city growing from 4.5 million people to 8 million in 2050, and aims to ‘cater to the needs of a more diverse and ageing population; break the link between congestion and growth; address housing affordability; mitigate and adapt to climate change; and ensure social and economic opportunities are accessible to all.’

As the Plan was devised and published well before the COVID-19 pandemic, it has a potential shortcoming in that it relies on an 80 per cent increase in public transport use for short trips, which may not be realistic with people feeling uncomfortable about getting on crowded public transport system and on-going social distancing requirements.

Nevertheless, aspects of a 20-minute walking/cycling city would have benefits for all residents in that it could reduce the need to use public transport and would reduce car congestion for people who have limited choice in where they work and how they commute.

You can read more of our AHURI Briefs examining the coronavirus pandemic and any effects on the housing, homelessness and urban sectors at our COVID-19 Resource Hub.