Back to search
Share
Report Governance and planning Population

This report considers evidence about the existence and scale of agglomeration economies, including in Australian cities. Agglomeration economies are inherently complex in terms of how they interact with city size and rising housing costs; regional and spatial issues; change over time; and may be subject to threshold and nonlinear effects.

There is currently little evidence about agglomeration effects on productivity for Australian cities, with a 1 per cent higher population implying approximately 0.06 per cent higher per capita income, which is not statistically significant. Even so, a city of 1 million people would imply a wage that is 6.3 per cent higher than a comparable city of 500,000.

Most of the published evidence on the relationship between city scale and productivity is from North America where there is a broad consensus that doubling population density increases wages by between 4 per cent and 13 per cent. The European data did not indicate agglomeration economies or any pattern of strengthening or weakening.

Nevertheless, it is clear that housing outcomes are reducing productivity. Rising housing costs means workers may not be able to move into an area that would offer them the potential to earn a higher wage. Instead, potential benefits from agglomeration accrue to those who own the scarce factors of production in the metropolitan economy—namely the owners of land and properties. 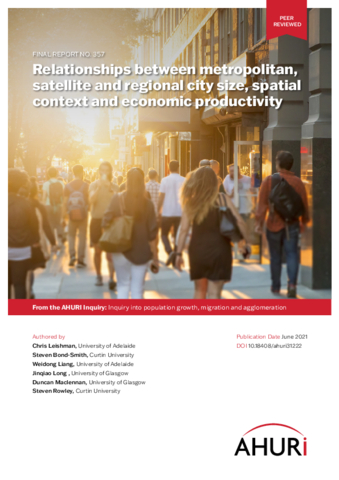