What are the contributors and barriers to downsizing?

Dwelling and location are primary considerations when downsizing

In the context of Australia’s ageing population and increasingly unaffordable housing, government policies assume older householders would be best to downsize into smaller homes as this would make more efficient use of Australia’s housing stock and improve housing affordability issues.

There is no concrete definition as to what is downsizing—it might be thought of as one (or more) of a number of options: a household moving to a property that has fewer bedrooms, is physically smaller, is on a smaller sized block of land, or it might be to a dwelling that is simply of lower value in a less expensive area or one that is cheaper to rent.

Government policies to encourage downsizing are focussed on stamp duty reductions for older households however research shows there are a wider range of barriers to downsizing (real and perceived) for older householders other than financial reasons. ABS data shows that while 39.2 per cent of all Australians moved house between 2006 and 2011 only 18 per cent of people aged over 65 moved house. This shows that the vast majority of older Australians do not downsize to a smaller, cheaper property.

...financial reasons to downsize, either to make money (10.1%) or because of financial difficulties (5.8%), are relatively insignificant overall.

An AHURI research survey conducted in 2011 with 2767 respondents (sourced from both online and the National Seniors Australia bi-monthly magazine) revealed the top reasons contributing to why households downsized. 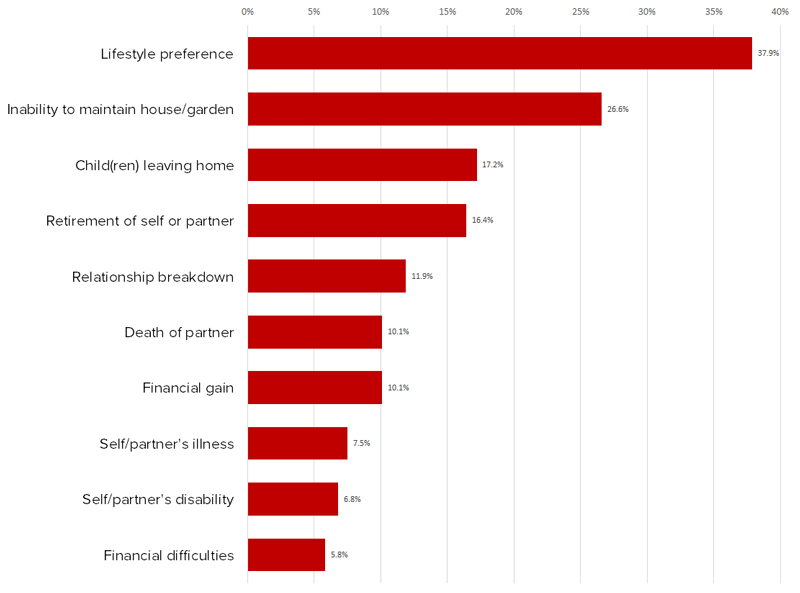 *respondents could choose more than one reason

This shows that financial reasons to downsize, either to make money (10.1%) or because of financial difficulties (5.8%), are relatively insignificant overall.

The key reason (Lifestyle preference) is quite broad, and overlays factors such as low maintenance, preferences of location and proximity to services. Interviews as part of the research survey found householders took it to mean things such as ‘when we’re travelling a lot you’ve got a responsibility of a house whereas in an apartment you just close your front door and go’, to be able ‘to take on some (new) activities … and to be close to conveniences’ and ‘to live nearer the sea.’

The survey didn’t question households who may have wanted to (or needed to) downsize but found the barriers too great, although it did identify barriers that downsizing households had perceived (and possibly overcome). These barriers can be gathered as three groups: dwelling and location, financial, and psychological.

Finding dwellings of suitable size (i.e. smaller but not too small) and situated nearby to where householders were currently living were primary considerations. For householders used to living in large family homes and who were making a choice to downsize, having space to continue to enjoy hobbies and to accommodate visiting family members means one and even two bedroom apartments were not deemed to be suitable.

Another concern was that dwellings be able to support any future disability requirement such as being equipped with wheelchair accessible bathrooms, by being on one level and not having too many steps, and being close to shops and public transport for a future when householders were no longer able to drive.

In Australia the value of the primary residential home is not considered in the value of assets a person may own in order to get the age pension. This makes owning a residential dwelling an effective way to leave a generous inheritance for children and other family members.

...high cost of new multi-storey apartments means that householders don’t necessarily have enough money from the sale of their larger family house to buy an apartment, particularly after stamp duty, bank and real estate agent fees, and moving costs are included.

Households who might choose to rent after selling would also find their newly acquired financial assets would reduce their age pension income. These households would need to be confident they could invest the money from the sale of their property to produce returns (after tax) that equalled or bettered potential income from the age pension.

Unfortunately the high cost of new multi-storey apartments means that householders don’t necessarily have enough money from the sale of their larger family house to buy an apartment, particularly after stamp duty, bank and real estate agent fees, and moving costs are included.

For households who may downsize by moving into retirement villages or caravan parks there are also concerns about escalating weekly or monthly fees and high exit charges imposed by village management (including that householders may not get any capital gains on units they buy through a lease/loan arrangement). There are also concerns of potential insecurity for households should the management of their village or park be sold to another entity that may wish to change the lease agreement or develop the site for other purposes.

The stress, emotional and physical energy of the packing and moving process can be a particularly significant barrier for older households. This highlights the importance of older households not leaving the move too late but rather moving while still young and healthy enough to cope with the process.

There is also a sense of psychological loss as items which have strong sentimental value may not fit into a new property and have to be sorted through and disposed of.

Householders in the survey also acknowledged the importance of the emotional attachment to their existing home and neighbourhood, where they know people, have strong social connections and have long-standing memories. Making new friends in new locations is not always easy for householders who may have mobility and other restrictions/ disabilities.

Older households who move to a new area and community can find themselves socially alienated as they are very unused to the neighbourhood, doctor, shops etc. in the new locality, and may also have very few local friends.