Over seventeen million Australians—around 67 per cent of the total population—live in the nation’s capital cities. Melbourne, Sydney and Brisbane (our largest cities) are growing most rapidly, with Melbourne’s population increasing by 2.3% in 2018-19, followed closely by Brisbane (2.1%) and Sydney (1.7%); across all capital cities the population grew by 1.8%.

As Australia becomes more urbanised, the development of effective, evidence-based ‘cities policy’ is firmly on the national agenda.

What constitutes a city?

Cities are commonly defined by measures of density, available amenities and population size. To define a major city the ABS uses a threshold of 100,000 residents congregated around an urban centre, in which dwelling density exceeds 45/km2 and/or population density is above 200/km2. Internationally, the OECD draws on a four-step process , based on the clustering of urban centres, to demark the boundaries of cities to provide a consistent definition of cities and their commuting zones.

In Australia’s tiered system of government, in which legislative authority is divided between federal, state/territory and local governments, so there are multiple layers of governance with different functions and these arrangements vary across Australia’s cities.

A review of federal government policies targeting cities since the 1990s, when a period of economic expansion began, shows a number of significant initiatives. However, in general, cities policies at the federal level have not been sustained. Recently, renewed interest in cities and urban policy at the federal level has delivered new policies, such as the launch of ‘City Deals’.

The role of states and territories

The role of local governments

Local governments have direct responsibility for implementing planning decisions and the direct delivery of services to citizens, however some argue that they are increasingly displaced by state governments’ strategies to promote the global competitiveness of capital cities. Local government autonomy is limited by low revenue and reliance on state and federal government subsidies. Additionally, the role of local government is subject to state government legislation and it is not formally recognised in Australia’s constitution . There are examples emerging of cooperation between local governments to achieve shared objectives, and new research by AHURI will explore how this works in practice.

The challenges of three tiers of government

The interactions between the different levels of government in states and territories can present challenges in the efficient delivery of infrastructure and services.

There appears to be an important  role for the Australian Government in addressing nation-wide challenges of population growth, new technologies, industrial transition and climate change issues which position cities as nodes in the networks of global economies. Policies which are ‘portfolio specific’ rather than ‘place specific’ can lead to a lack of coordination in urban infrastructure and hamper the ability to engage with international policies. This can contribute to an uneven distribution of resources and development that compromises the functioning and sustainability of cities. 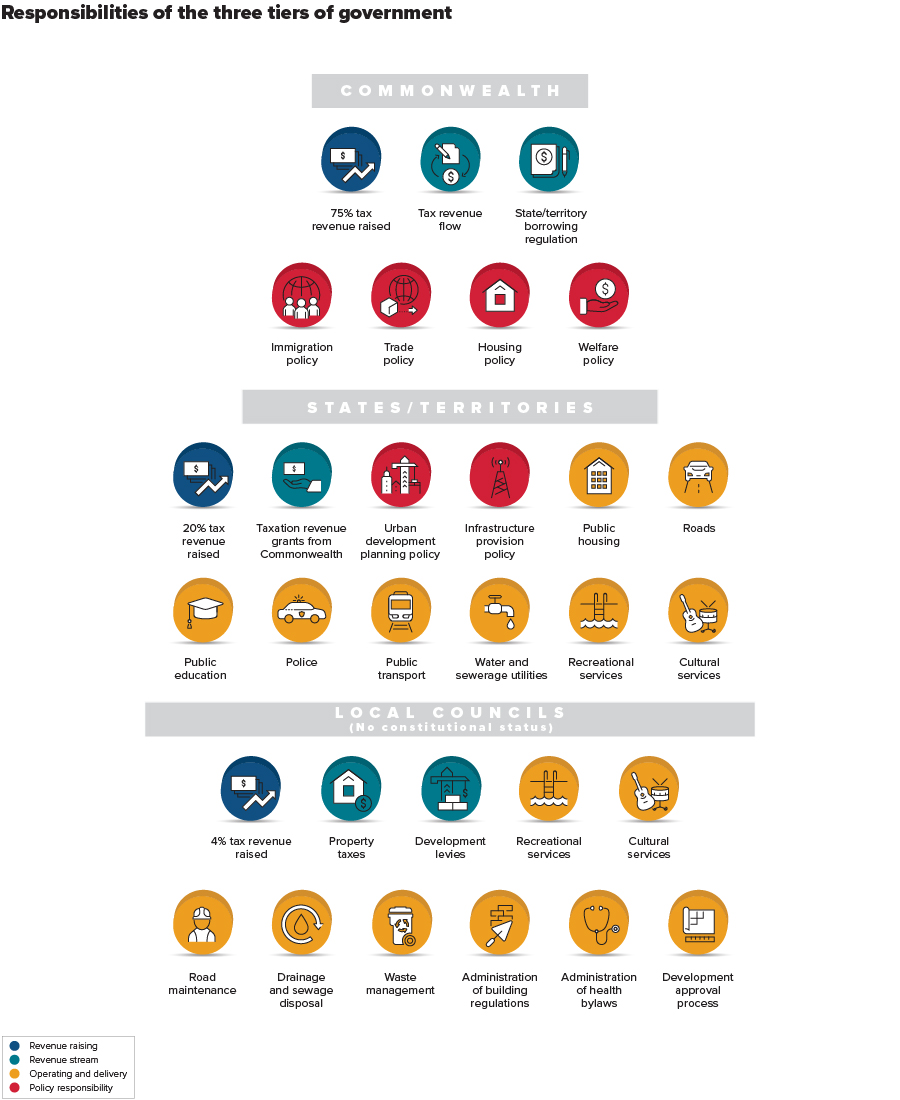 The emergence of the infrastructure bodies

Infrastructure Australia was established as an independent statutory body in 2008 to address the need to plan, prioritise and assess the long-term allocation of resources intended to develop cities and regions. State level infrastructure bodies have since been established in New South Wales (2011), Victoria (2015), Queensland (2015), South Australia (2018), Western Australia (2019) and Tasmania (2019 – within the Department of State Growth).

To guide the development of the Strategic Agenda for the National Cities Research Program, AHURI has undertaken a policy and evidence review. Strategic documents and metropolitan plans published by the Australian Government and the state and territory governments, as well as current publications from Australia’s Infrastructure bodies, were examined. The full method is described in the peer reviewed paper. Nine themes that capture what currently defines city policy in Australia were identified:

To complement the analysis of current policy, articles in prominent journals and research programs and publications of international research institutions were also reviewed. A range of research and policy issues outside of the current policy focus of Australian governments were identified, these converged around three additional research themes:

In our accompanying series of AHURI Briefs, each of these themes is examined in detail, framing the discussion about what comprises cities policy in Australia today, as well as the emerging themes and evidence gaps that will form the basis for a comprehensive National Cities Research Program.