Between 2006 and 2016, total dwelling stock increased by 17 per cent nationally, with WA seeing the greatest increase stock at 26 per cent and NSW the least at just 12 per cent. Thirty-seven of the 489 local government areas (LGAs) analysed for this research increased stock levels by more than 50 per cent over 10 years, while 70 per cent increased stock by up to 25 per cent (on average around 2 per cent per annum). New dwelling supply was concentrated in the inner—usually higher-value—areas in Sydney, Melbourne and Brisbane, while Adelaide and Perth saw the highest number of approvals in middle and outer areas.

The long-term nature of the urban development processes, including infrastructure provision or augmentation, means that it can take years before rezonings and project commitments result in new housing supply. Ultimately, market conditions and the ability to deliver an acceptable return will stimulate housing development. 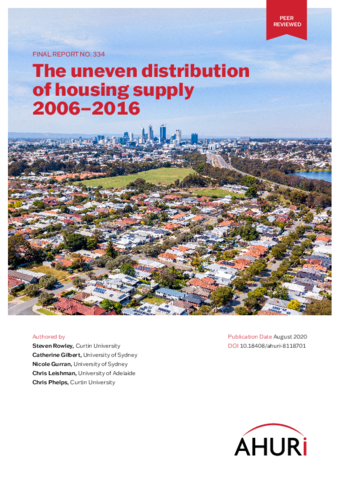