Many first homebuyer (FHB) assistance programs benefit existing homeowners rather than new homeowners, thereby compounding the problems of access and risk that such schemes are supposedly meant to address, according to new AHURI research.

The study assesses the effectiveness of such assistance in expanding access to home ownership to those whose entry would be otherwise delayed or impossible, or in making the cost of home ownership more affordable and less risky.

‘Current Australian first homebuyer assistance measures primarily act to bring forward first home purchase for households already close to doing so, rather than opening home ownership access to households otherwise excluded,’ says report author Dr Chris Martin of UNSW City Futures Research Centre. ‘These measures simply add to demand and push up property prices, and the amount of public funds spent on these schemes is huge – more than $20 billion over the past decade.’

Australian governments spent more than $20.5 billion supporting first homebuyers (FHBs) in the decade to 2021 through first homebuyer grants, stamp duty concessions and other cash grants. Even before the economic stimulus response to COVID-19, these forms of assistance were escalating—up from $1.2 billion to almost $3 billion in the four years from 2016. Around 92,000 Australian households become FHBs each year, representing some 20 per cent of total annual residential property transactions.

According to the research, the most prominent forms of FHB assistance in Australia during the past two decades have been demand-side interventions, which involve a benefit directly received by the consumer. These include rules governing mortgage lending (e.g. low-deposit mortgage products), FHB grant schemes and tax concessions such as stamp duty savings.

‘Unlike most of the international comparison countries, Australia stands out, as it overwhelmingly uses demand-side instruments and lacks a strategic framework’, says Dr Martin. ‘And unlike countries such as Finland and Singapore, Australian governments have resisted prioritising first homebuyers’ genuine interests by reforming tax settings that favour their housing market competitors: established homeowners and would-be rental investors.’

Compared with policy approaches in most comparator countries, supply-side measures that would increase the number of affordable homes suitable for first homebuyers in Australia are very thinly represented, according to the report.

Figure 2: FHB-assistance measures 2021: frequency/scale of use, Australia and comparator countries 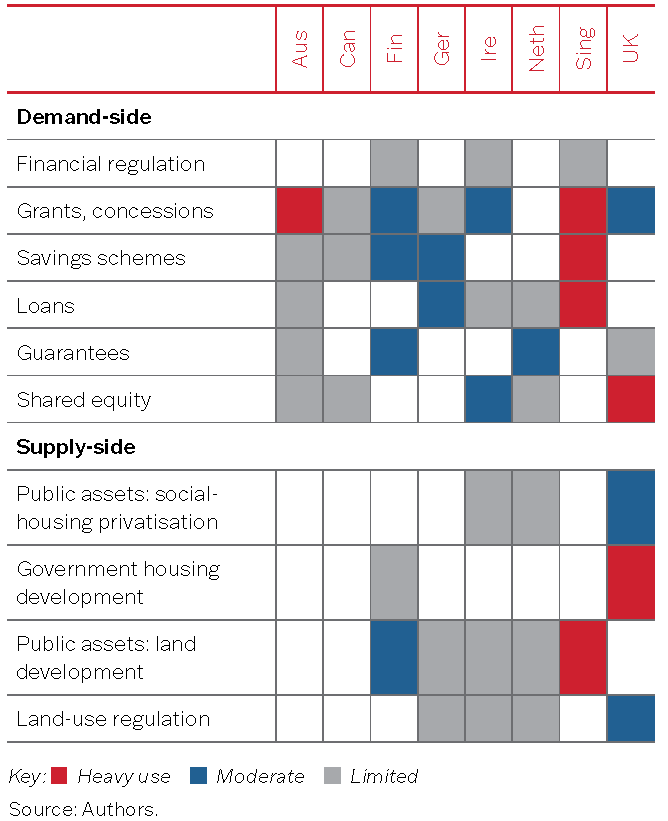